What is Powdery Mildew?

Powdery mildew is a very contagious fungus of the Erysiphales family. Erysiphales are parasites that must be kept in check at all times.

Infected plants produce mycelium, which develops on the leaves. Vegetative, root-like structures emerge from the fungus as it develops and begin to invade the host cell. They eat only what the plant provides them. 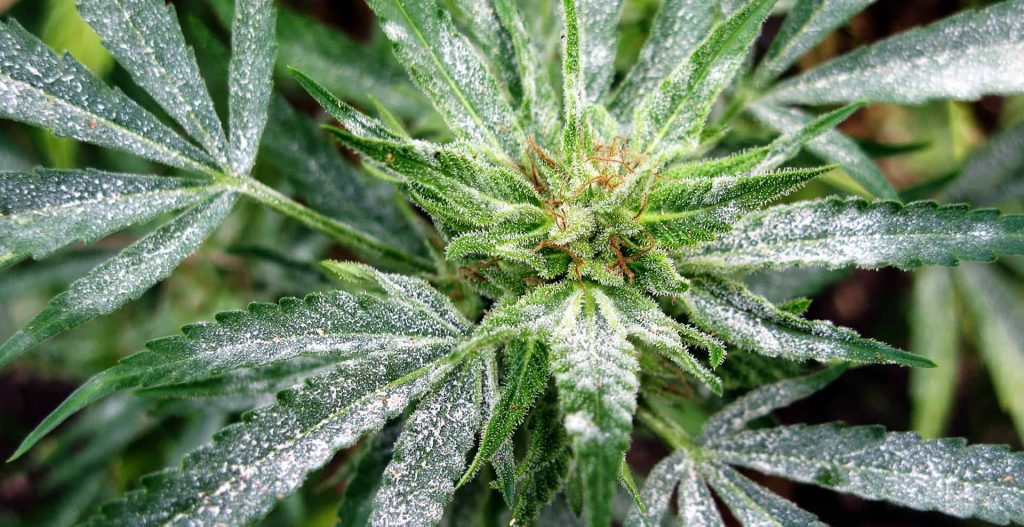 The tell-tale white powdery mildew patches are what first draw attention to powdery mildew, hence the name. These spots may first develop on younger or older leaves, depending on your plant. On lettuce, for example, the disease generally emerges on the lower, more mature leaves as the lettuce becomes older. Younger rose leaves, on the other hand, typically show the earliest symptoms of bud development.

If you detect fuzzy, flour-like circular spots on the leaves of your marijuana plants, you have powdery mildew. In certain cases, you’ll see withering or discolored leaves. If exposed to nearby leaves, the powdery mildew infection spreads fast and consumes everything in its path.

Powdery mildew is easy to spot because of the striking contrast between its white color and the green of the leaves. Fortunately, it is treatable if applied promptly. It’s tough to avoid and battle powdery mildew because of the spores, which are frequently imperceptible as they travel through the air. 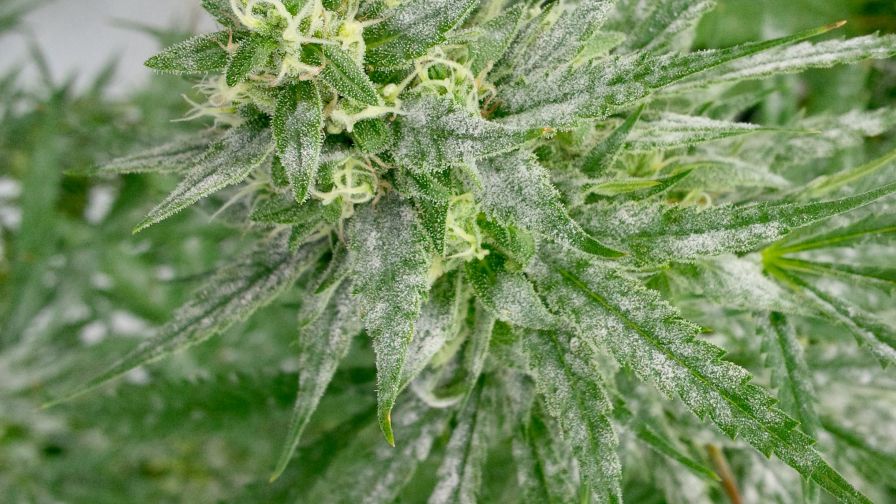 Powdery mildew is more prone to appear when the relative humidity in your growing environment is high (above 55 percent) and there is little to no air circulation. It can also happen if your marijuana plants are crowded in the grow chamber or at the growing location. Powdery mildew is more prone to spread when leaves are in close proximity to one another, making it even more difficult to eliminate.

Powdery mildew attacks young plants first, destroying the plant’s stems, buds, and leaves in the process. You’ll be able to tell which buds have powdery mildew if they have a wet, musty scent coming from them.

It’s impossible to get rid of the fungus once it’s spread to a bud. If the powdery fungus is left untreated, your marijuana plant will ultimately turn yellow, then brown, and eventually die.

Powdery fungus can develop to leaf septoria (yellow spots on the leaves) if it is not treated. Identify and cure this illness so you can still get the most out of your marijuana harvest.

You must not allow your plants to get to this point. Be careful to examine your plants on a regular basis and to be on the lookout for any changes that may occur.

How To Get Rid Of Powdery Mildew During Flowering 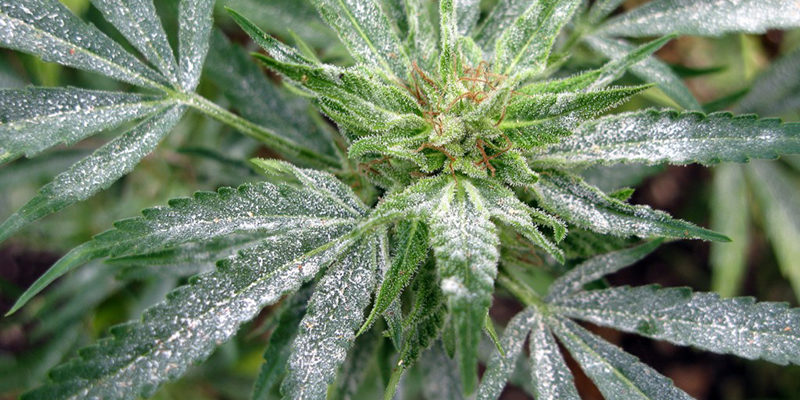 In any case, you should take precautions to avoid a powdery mildew infestation if at all feasible. Make sure your plants have plenty of additional space when you first plant or transplant them in their mature position. Powdery mildew is far more likely to appear if they are planted closely together.

Your marijuana plants need at least five hours of light after watering, so arrange your watering schedule accordingly. Depending on your growth conditions, this might be either artificial or natural light.

Use a UV lamp to keep powdery mildew spores away from your expensive plants if you are an indoor marijuana farmer. Growing experts could trim the fan leaves that don’t get direct sunlight because of the shade they’ve built up over time.

As a result, powdery mildew will have a more difficult time landing and getting started. Additionally, your plant will conserve energy and put it to better use on other leaves and growths as a result of this technique.

In addition, it can be used as a prophylactic measure before any signs of powdery mildew develop. Use one-half teaspoon baking soda and a quart of water instead for a similar result.

You can also use oil sprays like neem, sesame, or fish oil to kill or prevent powdery mildew. Other fungal infections may benefit from the use of these sprays as well. As a final resort, you can use a milk spray, which is a solution consisting of a 40/60 mixture of milk and water.

Because milk contains protein, using it as a natural antibacterial is a no-brainer. The mildew is killed by the antiseptic. When the sun (or artificial light) is shining strongly, you may use a milk spray preventatively by spraying it on your plants every ten days. All gardeners employ this technique on their plants on a regular basis.

Use a plastic bag to remove damaged leaves from a plant that has been afflicted with powdery mildew and needs care. Put the bag in a container with a tight cover and seal it.

In order to prevent the spores from being released into the air and infecting adjacent plants, place them in a plastic bag. Using fungicide on the stems that contained the removed leaves will help your plant recover faster once the diseased portions have been removed.

It might take a plant weeks to develop symptoms after being infected. The author is Jorge Cervantes.

Alternative Approaches Oil sprays like cinnamon oil, garlic oil, coriander oil, clove oil, jojoba oil or cottonseed oil sprays are some of the alternate ways to cure your plants. Mold Control, for example, is a commercial solution that will always do the job. Buy Bergman’s Plant Protector if you want to be sure to get rid of powdery mildew.

In addition, any garden shop should have copper-based treatments available for purchase. To get rid of the fungus completely, use 1 tablespoon of hydrogen peroxide with 1 gallon of water. Another option is to mix one quart of water with one teaspoon of limonene, which has fungicidal effects without actually killing the fungus.

Sulfur burners are the final defense against and containment of the fungus. Make sure you stay away from sulfur burners throughout therapy if you use them. Sulfur burners might induce respiratory irritation in patients. When you’re done with the treatment, wipe off all of your windows and walls to ensure that all sulfur burner residue has been gone.

Symptoms of a Plant

Try the tap water-paper towel approach if you want a quick and easy solution to get rid of powdery mildew on your clothes. Wet the paper towels and wipe the diseased leaves with them gently to remove the mildew that is already present.. If you bump your leaves too much while doing this, spores may enter the air and begin to spread.

Add two or more fans to your grow area to help keep things cooler and prevent the growth of powdery mildew. Use two fans in your grow chamber, one to circulate air through the leaves and the other to exhaust the heat from the space. The “used” heated air will be expelled from the room and fresh air will be brought in to replace it.

What are the powdery mildew health risks on cannabis?

Powdery mildew can slow down photosynthesis if left untreated. As soon as you find it, take care of it so it doesn’t harm your crop.

How to remove powdery mildew from buds?

Powdery mildew can’t be removed from buds, which is a bummer. Once inside a bud, it will carry on with its plan. Before it dies, your marijuana plant will turn yellow and then brown.

What are some examples of powdery mildew treatment?

Neem oil sprays, garlic sprays, and sesam oil aerosols are among the many types of oil sprays that people utilize. Sulfur burners, copper-based treatments, and Mold Control, as well as Bergman’s Plant Protector, are all available for purchase. In order to produce your own mildew treatment or spray, you can combine 40 percent milk and 60 percent water. You may also make a solution using one tablespoon of hydrogen peroxide and water.

Is Powdery Mildew Harmful to Humans?

Growers that work with powdery mildew should not be concerned about the effects on their health. It’s safe to be around the fungus. However, if it infects a crop that is later smoked, this fungus might pose a health concern to you or your customers.

A number of pulmonary problems might arise from smoking powdery mildew. This is especially important for those with chronic illnesses like asthma.

It will also give the impression that your goods is of inferior quality, which may deter potential customers in the future. You don’t want this fungus on your buds, so deal with it right away so it doesn’t have a chance to spread.

It Spreads and Persists for Multiple Seasons

The latter stages of this fungus are extremely dangerous because it disseminates through the air. If plants aren’t removed from the region, it can live on them for several seasons at a time. If you don’t deal with the fungus properly the first time, you may have to deal with it for several seasons.

In your garden box right now, there might be a weed holding spores, just ready to spread the fungus to your critical crops. If you ever come across a plant that has this issue, remove it from your growing space immediately to avoid having to deal with it indefinitely.

The spores travel via the air and adequate ventilation might assist them spread more swiftly to your other healthy plants when you’re dealing with indoor fungal infestations.

Every grower has to battle with powdery mildew at some time. Despite its prevalence, it can be difficult to cure since each case of the disease is unique. Take your time to consider the options. Prior to removing diseased plants, use the tried-and-true methods first. It is possible to contain most epidemics if you act early and invest in powerful equipment like the BRe3 wand.

Better still, take steps to keep this fungus from growing in the first place. Installing fans will help to enhance ventilation while also reducing the relative humidity in the room. Plants should be pruned to allow light and air to reach the lowest parts of the plant.

After reading this article, you’ll be more prepared if you get infected with this fungus. 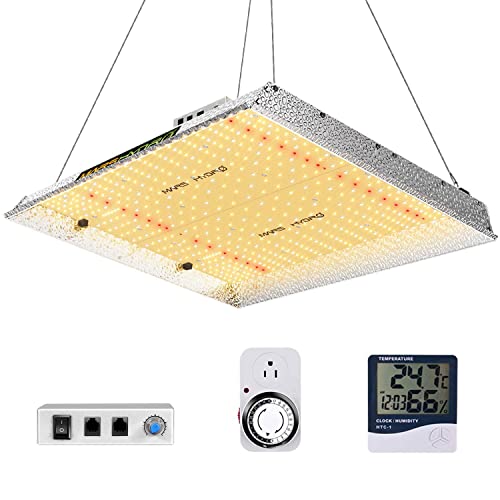 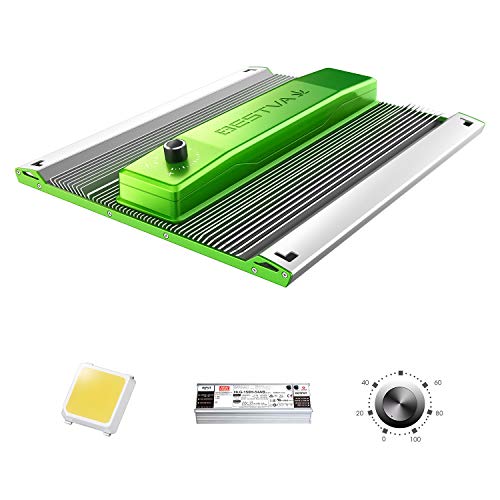 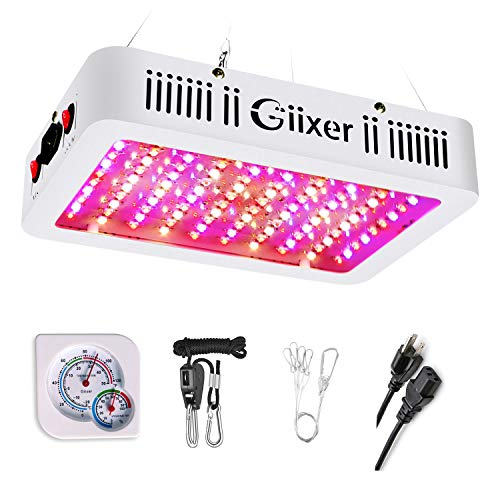